On Monday July 22nd, just after 4 o’clock in the afternoon, Carrie Bacovsky, our beneficiary since 2016, 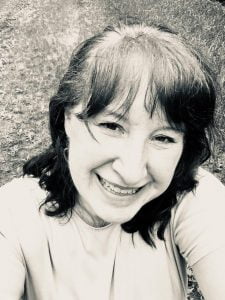 passed away. As I write about her, less than a week later, I’m challenged to give you a full sense of the amazing person that we came to know. Carrie was diagnosed with metastatic breast cancer in August of 2011, 5 months after her beloved father Jack, died. Carrie often mentioned him and the love of the outdoors, confidence and independence that he helped to foster in her. If I would choose one phrase to describe Carrie, it would be “self reliant”.

She was a single woman who took total control of her own health care. An avid Tweeter and Facebook poster, she often shared alternative cancer treatments and engaged in holistic and natural supplements herself. Just a month ago, she went to Mexico on her own to try an immunotherapy treatment not available in the States. She was always upbeat and positive, even after a November 2018 examination found that cancer had spread to 15 tumors in her brain. Carrie was deeply religious and found great comfort in her church and faith in Jesus.

Carrie is the fifth associated person that we have lost since we started Savage Support in 2015. I was not prepared for this. I was, perhaps like you, aware of the statement: “BREAST CANCER IS THE MOST TREATABLE FORM OF CANCER”. My most immediate experience with breast cancer was working with our founder, Deanna Savage. Deanna had her own journey and recovery of almost 3 years. But she returned to her work and her life and herself seemingly stronger than ever. I have since learned that this doesn’t always happen. Many breast cancer fighters face years and years of treatment and cancer re-occurances. This makes our mission of assistance beyond medical treatment, all the more significant.

I feel profoundly honored to have known Carrie and all of our passed beneficiaries. As all of us at Savage Support, I feel gratified to have provided some day to day aid as they fought so fiercely against their cancers. Please consider a donation to assist our growing corps of beneficiaries who fight the courageous fight to return to their pre-diagnosed lives.

Thank you very much,

Not a beneficiary? Want to become one?